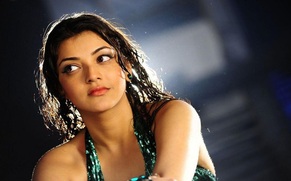 Kajal was born in Mumbai to Vinay Agarwal, an entrepreneur, and Suman Agarwal, a confectioner. She is of Punjabi descent. She has a younger sister, Nisha Aggarwal, who is also an actress appearing in Telugu and Tamil films. She studied at St. Anne's High School, Colaba, Mumbai and Jai Hind College, Mumbai. She graduated from K.C. College, Mumbai with a degree in Mass Media. She started her modelling career while she was still in college. She was planning on pursuing MBA in Brand Management before deciding to pursue acting.
Kajal's next film is Sarocharu, where she will star opposite Ravi Teja for the second time in her career. The film will release on 21 December 2012.
In 2013, Kajal will be seen opposite Ram Charan Teja for the second time in her career in V. V. Vinayak's Naayak. The film is scheduled to release in January 2013. She will also be seen opposite Jr. NTR for the second time in her career in Srinu Vytla's Baadshah. Baadshah is tentatively scheduled to release in March 2013. She is also currently shooting for her third film in Bollywood, Special Chabbis alongside Akshay Kumar. It is said that she would be the only female character in the film. The film is to release on 8 February 2013. Another Tamil film, All in All Azhagu Raja has been announced, where she will again star opposite Karthi.
It is also announced that Kajal, along with Allu Arjun, would make a cameo appearance in the film Yevadu, starring Ram Charan Teja, Shruthi Hassan and Amy Jackson. This film would mark the third time she is acting alongside Ram Charan Teja and the second time alongside Allu Arjun.